This has come up several times in the last week. “I have 2n servers with 2 or 4 bricks each and I want to add 1 more server. How do I ensure the new server isn’t a replica of itself?”

This isn’t a simple thing to do. When you add bricks, replicas are added with each set of bricks in the replica count. For “replica 2”, each 2 new bricks added forms a replica pair. To prevent your two new bricks on the new server from being replicas of themselves, you’ll need to move an old brick to the new server. This is done with the replace-brick command. 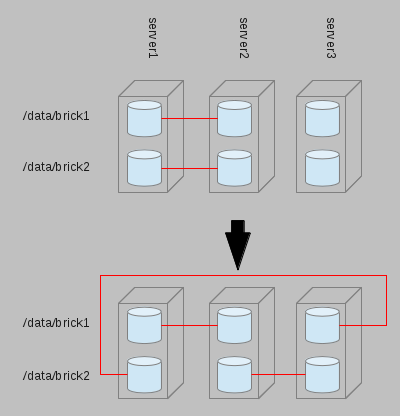 Once it’s completed then commit the change

Check your data to ensure it’s all working right. If not, panic! Well, I suppose you could come join us in the IRC channel to help you figure out why, but it really should just work. First thing we’re going to tell you is to check the logs, so might as well do that too.

Ok, now that your data’s all moved, your volume is completely operational and all it’s circuits are functioning perfectly, you’re ready to add your two new bricks.

Save yourself some time and just format the brick store that’s mounted at server1:/data/brick2. You’ll have to wipe it and it’s xattrs anyway, so that’s much quicker.

And you’re all set.